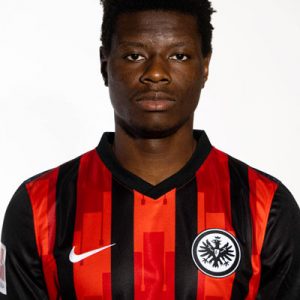 Ragnar Ache Marleuthet (born 28 July 1998) is a German professional footballer who plays as a forward for Eintracht Frankfurt.

Born in Frankfurt, Germany, Ache started his career in the youth ranks of Dutch side Sparta Rotterdam. He made his debut for the club’s reserve side, Jong Sparta, in the Tweede Divisie on 20 August 2016 against TEC. He came on as a 66th minute substitute for Ugur Altintas and scored a goal in the 66th minute as Jong Sparta drew the match 2–2. He would go on to score seven goals in 17 appearances for the Sparta Rotterdam reserve side for the 2016–17 season.

On 4 April 2017, after good performances for Jong Sparta, Ache made his debut for the senior side in the Eredivisie against Heerenveen. He came on as substitute for Ilias Alhaft in the 80th minute as Sparta Rotterdam lost 3–0. That would be his only appearance with the senior side that season. At the start of the 2017–18 season, Ache was put into the first-team and came on as a substitute for Craig Goodwin in Sparta Rotterdam’s 3–0 defeat at VVV-Venlo in the opening game of the season. On 25 August 2017, Ache scored his first two professional goals for Sparta Rotterdam, grabbing a brace in the club’s 2–2 draw away at NAC Breda. Ache came onto the pitch in the 52nd minute with Sparta Rotterdam down 2–0 and scored in the 70th and 84th minutes of the match.

On 3 January 2020, Ache signed a five-year contract with German club Eintracht Frankfurt. He made his first appearance for the club on 25 September 2020 against Hertha BSC, coming on as a 66th minute substitute as Eintracht Frankfurt won 3–1.