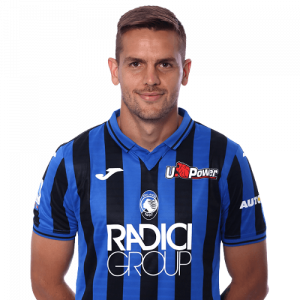 Rafael Tolói (born 10 October 1990) is a Brazilian-born Italian professional footballer who plays as a centre-back for Serie A club Atalanta (of which he is also team captain) and the Italy national team.

On 26 August 2015, Tolói was signed by Atalanta B.C. for a €3.5 million transfer fee. He made his debut on 13 September, in a 2–2 league draw at Sassuolo, replacing Gianpaolo Bellini in the 80th minute. In his second match, eleven days later, he started and scored the sole goal, settling a 1–0 league win at Empoli.

On 22 February 2018, Tolói scored for the first time in a UEFA competition, against Borussia Dortmund in the Europa League round of 32. The match ended in a 1–1 draw, which was not enough to see Atalanta through the next round after a 3–2 defeat in the first leg.

Tolói became Atalanta’s captain during the 2020–21 season, following the departure of his predecessor Papu Gómez from the club.