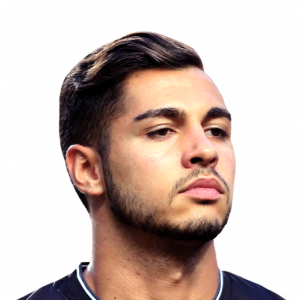 Luís Rafael Soares Alves (born 9 May 1995), commonly known as Rafa, is a Portuguese footballer who plays as a left back for Spanish club SD Eibar on loan from Vitória de Guimarães.

Born in Marco de Canaveses, Porto District, Rafa joined FC Porto’s youth system in 2005 from local F.C. Alpendorada. On 21 August 2013, while still a junior, he made his professional debut with the former’s B team, coming on as a 79th-minute substitute in a 1–0 away win against Portimonense S.C. for the Segunda Liga.

From January 2016 to June 2017, Rafa was on loan to Académica de Coimbra and Rio Ave FC, with both clubs in the Primeira Liga. He played his first game in the competition on 22 January 2016 while at service of the former in a 1–2 away loss to Vitória de Setúbal, and scored his first goal the following matchday but in a 2–3 defeat at Sporting CP.

On 22 August 2017, deemed surplus to requirements by new Porto manager Sérgio Conceição, Rafa was loaned to EFL Championship side Fulham in a season-long deal. He made his debut on 31 October, coming from the bench in a 0–2 home loss against Bristol City.

Rafa’s loan deal was mutually terminated by on 31 January 2018, after they had loaned Matt Targett earlier that month. The same day, he signed a permanent deal with Portimonense in his country’s top flight.