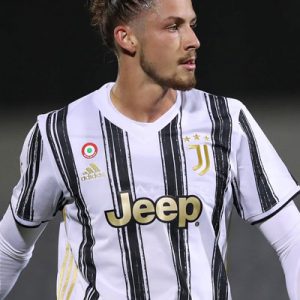 Radu Matei Drăgușin (born 3 February 2002) is a Romanian professional footballer who plays as a centre-back for Italian club Juventus U23 and the Romania national under-21 team.

Early years
Drăgușin was attracted to football by his cousin, and joined the youth squads of Sportul Studențesc at the age of seven. He played at the club for four years before its dissolution, and then moved to Regal Sport București, where he was teammates with Octavian Popescu and Luca Florică among others.

Juventus
Youth and Under-23
In 2018, Drăgușin transferred to Italian club Juventus from Regal Sport for a fee of €260,000. Initially an under-17 player, Drăgușin quickly moved to Juventus’ under-19 team. On 25 January 2020, midway through the 2019–20 Serie C season, Drăgușin made his debut for Juventus U23 against Pro Patria, coming on as a substitute in the 36th minute for Raffaele Alcibiade. On 13 February 2021, he scored his first career goal in a 3–0 away win against AlbinoLeffe.

Senior
On 8 November 2020, Drăgușin was first called-up for the senior team by Andrea Pirlo for a Serie A game with Lazio. He made his club and European debut on 2 December, featuring as a substitute in 3–0 home victory over Dynamo Kyiv in a UEFA Champions League group stage game. Drăgușin’s league debut came on 13 December, coming on as a substitute in the 90th minute for Matthijs de Ligt in a 3–1 away win to Genoa. On 13 January 2021, Drăgușin started his first game for Juventus in the Coppa Italia, defeating Genoa 3–2 after extra time.