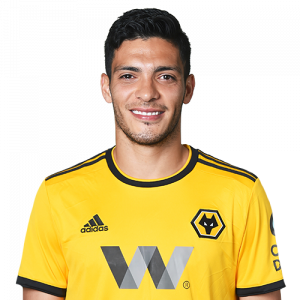 Raúl Alonso Jiménez Rodríguez (born 5 May 1991) is a Mexican professional footballer who plays for Premier League club Wolverhampton Wanderers and the Mexico national team as a forward.

He began his career in Club América’s youth system before debuting in the first division in October 2011. He won his first championship with América in 2013, winning the Clausura tournament, and was the team’s second-highest goalscorer. In August 2014, Jiménez joined Spanish side Atlético Madrid. After one season, he signed for Benfica, with whom he won two consecutive league titles, among other major honours. He amassed 120 appearances and scored 31 goals during his three years with the Portuguese side. In June 2018, Jiménez joined Wolverhampton Wanderers on loan, and was the team’s top-scorer with 17 goals across all competitions. He joined Wolves on a permanent basis the following year.

On 14 September, Jiménez made his 100th appearance for Wolves in their first league game of the season, marking the occasion by scoring in the third minute of the match against Sheffield United. He was named Man of the Match by BBC Sport for his performance in the team’s 2–0 win. On 3 October, it was announced that Jiménez had signed a four-year contract extension with Wolves, thus effectively ending rumors of a transfer.

On 29 November, five minutes into Wolves’ Premier League fixture against Arsenal at the Emirates Stadium, Jiménez was knocked unconscious after a clash of heads with David Luiz. Although Luiz continued to play on for the rest of the first half with minor injuries, Jiménez had to be stretchered off and was immediately taken to a hospital for severe trauma, where he was eventually deemed conscious. It was confirmed the following morning that he had fractured his skull in the clash with Luiz and had required surgery soon after hospitalisation, effectively ending his season.