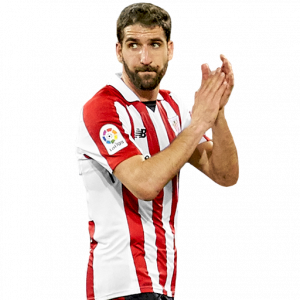 Raúl García Escudero (born 11 July 1986) is a Spanish professional footballer who plays for Athletic Bilbao mainly as an attacking midfielder but also as a central midfielder or a second striker.

Formed at Osasuna, he spent most of his career at Atlético Madrid, scoring 46 goals in 329 games across all competitions over eight seasons and winning six major titles, including the 2014 national championship and the 2010 Europa League. In 2015 he signed with Athletic Bilbao, going on to have an equally lengthy spell and win the 2020–21 Supercopa de España.

García played twice with Spain, making his debut in 2014.

On 31 August 2015, after a transfer request, García signed a four-year contract with Athletic Bilbao which included a release clause of €40 million. He scored in his first appearance, helping to a 3–1 home victory over Getafe CF where he featured 79 minutes.

García made his 100th appearance for the club in October 2017. In late May 2018, after he had scored ten league goals in each of his first two seasons, he and Athletic agreed on a contract extension running to June 2020.

On 20 July 2019, the 33-year-old García agreed to a one-year extension at the San Mamés Stadium until June 2021, with no release clause. He scored a career-best 15 goals that campaign (seven penalties) – entering the league’s record books after becoming the first player to find the net in every month of a calendar year – but his team could only finish 11th.

García became only the 11th player in La Liga history to reach 500 games in the competition on 31 December 2020, in a 1–0 home Basque derby loss to Real Sociedad.