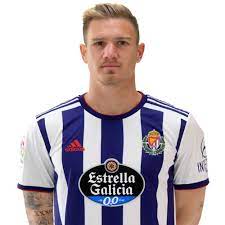 Raúl García Carnero (born 30 April 1989) is a Spanish professional footballer who plays for Real Valladolid as a left back.

Born in A Coruña, García began playing football for local Victoria CF, before signing with neighbouring Deportivo de La Coruña at the age of 12. He spent the vast majority of his first years as a senior with the Galicians’s B-team, also being loaned to fourth division club Montañeros CF for the 2008–09 season.

On 4 April 2010, García made his first-team – and La Liga – debut, in a 0–3 away defeat against Atlético Madrid. He played a further four league games with the main squad as until the end of the campaign and, in June, signed a new one-year contract.

In the following season, García returned to Deportivo B and was loaned to fellow third level side UD Melilla in the summer of 2011. Subsequently, he was offered a new deal by his parent club, on the condition he accepted another loan; the player refused and signed with UD Almería on 5 July 2012, initially being assigned to the reserves.

On 26 October 2012, García was called up to the first team due to injuries. On the following day, he made his competitive debut with them by starting in a 1–0 home win against SD Huesca; he scored his first goal as a professional in the next matchday, a 2–0 success at Recreativo de Huelva.

On 28 June 2013, after contributing with eight appearances as Almería returned to the top level after two years out, García was promoted to the first team due to a clause on his contract. However, he appeared rarely in the Spanish top flight, and was subsequently loaned to Deportivo Alavés in January 2014.

García terminated his contract at the Estadio de los Juegos Mediterráneos on 14 July 2014, and joined Alavés permanently just hours later. He scored a career-best five goals in 2015–16, achieving promotion to the top division as champions.

On 5 June 2017, García signed a three-year contract with fellow league club CD Leganés. In January 2019, having been sparingly played during the first part of the season, the free agent joined Girona FC – also of the top tier – on a five-month deal.

On 1 July 2019, after suffering relegation, García moved to Getafe CF on a three-year contract, but agreed to a six-month loan at Real Valladolid the following transfer window. On 28 July 2020, he signed a permanent three-year deal with the latter club.