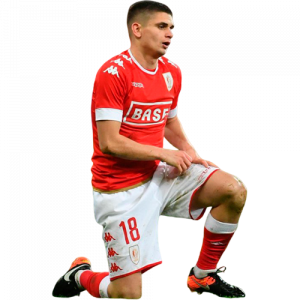 Răzvan Gabriel Marin (born 23 May 1996) is a Romanian professional footballer who plays as a midfielder for Italian Serie A club Cagliari, on loan from Ajax, and the Romania national team.

Marin began his senior career with local club Viitorul Constanța at the age of 17. He established himself as a first-team regular, and earned a move to Standard Liège at the start of 2017. Two and a half years later, he was transferred to Dutch team Ajax for a reported fee of €12.5 million.

Marin made his debut with Romania in 2016, after having previously represented the country at youth levels.

Cagliari
On 31 August 2020, Marin joined Italian Serie A club Cagliari on loan with an obligation to buy. He signed a 5-year contract.