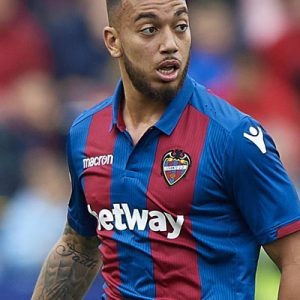 Rúben Miguel Nunes Vezo (born 25 April 1994) is a Portuguese professional footballer who plays for Spanish club Levante UD as a centre-back or a right-back.

Vitória Setúbal
Born in Setúbal to a Cape Verdean father and a Portuguese mother, Vezo joined local Vitória Futebol Clube’s youth system at the age of 11. He was promoted to the first team for the 2013–14 season, and on 18 August made his Primeira Liga debut, starting in a 1–3 home loss against FC Porto.

During his short spell, Vezo featured the full 90 minutes in all the league matches he appeared in, save for the last five minutes of a 4–1 win at Vitória S.C. where he was sent off, and 34 against F.C. Arouca (1–0 home victory) for the same reason.

Valencia
On 4 November 2013, Vezo signed a four-year contract with Valencia CF for a reported fee of €1.5 million, with the move being made effective in the January transfer window. He made his La Liga debut on 8 February 2014, playing the last nine minutes in a 5–0 home defeat of Real Betis. On the 23rd, profiting from suspension to compatriot Ricardo Costa, he played the full 90 minutes against Granada CF also at the Mestalla Stadium, and scored his first goal as a professional after netting from a free kick taken by Dani Parejo to help the hosts come from behind in the 90th minute and win it 2–1; in the process, he became the Spanish club’s youngest ever foreigner to achieve that feat.

Levante
On 29 January 2019, Vezo moved to Levante UD also in a temporary deal. On 1 July, he agreed to a permanent five-year contract with the club.