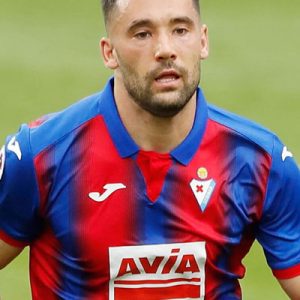 Enrique González Casín (born 16 May 1990), commonly known as Quique, is a Spanish professional footballer who plays for SD Eibar as a forward.

Quique was born in Valladolid, Castile and León. He finished his youth career with local club Real Valladolid, and made his senior debut with the reserves in the 2007–08 season, in Segunda División B.

On 27 August 2010, Quique played his first match as a professional, coming on as a late substitute in a 3–0 home win against Villarreal CF B for the Segunda División. He finished the campaign with six appearances for the main squad, which returned to La Liga after a two-year absence.

On 2 September 2011, Quique joined third division side UD Logroñés on loan. After his return, he rejected a loan to CD Guijuelo and returned to the B team in Tercera División, scoring 19 goals during 2012–13.

After being deemed surplus to requirements by new Valladolid manager Juan Ignacio Martínez, Quique terminated his contract on 21 August 2013. He signed for CD Guadalajara on the same day.

After netting a career-best 24 goals during his first and only season, Quique joined UD Almería of the top flight on 21 May 2014. He made his debut in the competition on 12 September, replacing Wellington Silva in the 64th minute of a 1–1 home draw against Córdoba CF.

Quique scored his first goal for the Andalusians on 5 December 2014, the third in a 4–3 away victory over Real Betis in the round of 32 of the Copa del Rey. On 30 January 2015, he was loaned to second-tier Racing de Santander until June.

After returning from loan, Quique was an undisputed starter for Almería, scoring 15 goals during the season. Highlights included a brace in a 3–1 win at SD Ponferradina, on 17 April 2016.

On 20 July 2018, Quique joined Deportivo de La Coruña still in the second division, for a fee of € 1.7 million. He was their top scorer during the season, scoring 17 goals as the side missed out on promotion in the play-offs.

Quique agreed to a five-year deal with SD Eibar on 14 July 2019, for an undisclosed fee reported to be in the region of €3 million.