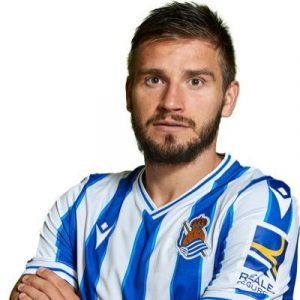 Cristian Portugués Manzanera (born 21 May 1992), commonly known as Portu, is a Spanish professional footballer who plays for Real Sociedad as an attacking midfielder.

Valencia
Born in Murcia, Portu was a product of Valencia CF’s youth system. He made his senior debut with the reserves at only 17, going on to spend several seasons with the side in Segunda División B as well as one in Tercera División; in January 2012, he was called up by first-team manager Unai Emery due to a string of injuries.

Albacete
On 11 July 2014, it was announced that Valencia had sold Portu to Segunda División club Albacete Balompié with a buy-back option. He scored his first professional goals on 18 October, netting a brace but in a 2–3 defeat at CD Mirandés.

Girona
On 21 June 2016, after Alba’s relegation, Portu signed a three-year deal with Girona FC also in the second tier. He scored eight goals (also providing eight assists) in his first season, helping the Catalans to a first-ever top flight promotion.

Portu bettered that total to 11 the following campaign, as Girona easily retained their league status.

Real Sociedad
On 18 June 2019, Real Sociedad announced via their Twitter account that they had reached a preliminary agreement for the transfer of Portu for a fee of €10 million. The five-year contract was confirmed the same day. He scored his first goal for his new team on 29 September, in a 3–2 away loss against Sevilla FC.