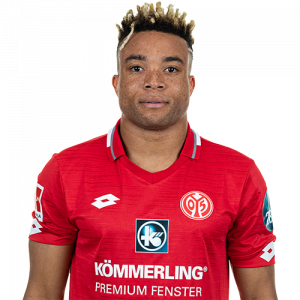 Pierre Kunde Malong (born 26 July 1995) is a Cameroonian professional footballer who plays for German club Mainz 05 and the Cameroon national team as a central midfielder.

Born in Limbe, Malong started his senior career in Spain with Alcobendas CF; he made his senior debut for the club on 11 November 2012 by starting in a 2–0 Regional Preferente home win against EF Periso. His first goal came the following 3 March, in a 2–0 success at Atlético Leones de Castilla.

In 2013 Kunde moved to Atlético Madrid, returning to youth football. The following year, he was promoted to the reserves in Segunda División B, immediately becoming a regular starter but suffering relegation in his first season.

On 21 July 2016, Kunde was loaned to Extremadura UD for one year, still in the third division. He scored a career-best 11 goals during the campaign, with braces against San Fernando CD (3–1 away win), Linares Deportivo (3–1 away win) and Atlético Mancha Real (2–1 away win).

On 25 July 2017, Kunde joined Granada CF, freshly relegated to Segunda División, on a one-year loan deal. He made his professional debut on 20 August, coming on a late substitute for Javier Espinosa in a 0–0 home draw against Albacete Balompié.

Kunde scored his first professional goal on 8 October 2017, netting the last in a 2–0 home defeat of CD Lugo. The following 22 April, he scored a brace in a 3–3 home draw against Cultural y Deportiva Leonesa.

On 6 July 2018, Kunde was transferred to Bundesliga side 1. FSV Mainz 05 and signed a four-year contract.