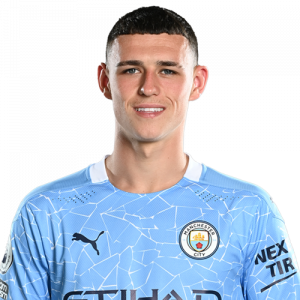 Philip Walter Foden (born 28 May 2000) is an English professional footballer who plays primarily as a forward and midfielder for Premier League club Manchester City and the England national team.

Foden’s breakthrough into professional football came in 2017 when he won the FIFA U-17 World Cup Golden Ball award following England’s successful Under-17 World Cup campaign. He made his debut for City during the same year and in December was named BBC Young Sports Personality of the Year.

Foden has since made over 100 appearances for the club, winning eight honours including becoming the youngest recipient of a Premier League winners’ medal. In 2019, he won a second Premier League and became the club’s youngest-ever goalscorer in the UEFA Champions League, and is the youngest English player to both start a match and score in the knockout stages of the competition.

Foden has represented England at many youth levels, scoring 19 goals in 51 youth caps. He was first called up to the senior team on 25 August 2020 and made his debut against Iceland on 5 September 2020, in a 1–0 victory in the UEFA Nations League.

Born in Stockport, Greater Manchester, Foden was a boyhood supporter of Manchester City. He joined the club at the age of four and signed his Academy scholarship in July 2016. He was privately educated at St Bede’s College, with his tuition fees being paid for by Manchester City. On 6 December 2016, City head coach Pep Guardiola included Foden in the matchday squad for the Champions League group stage match with Celtic; he was an unused substitute in the 1–1 home draw.