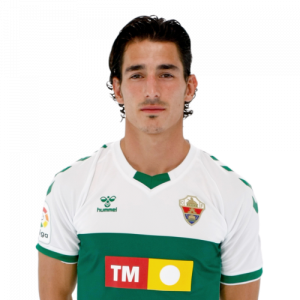 Pere Milla Peña (born 23 September 1992) is a Spanish professional footballer who plays for Elche CF as a winger.

Born in Lleida, Catalonia, Milla graduated from UE Lleida’s youth setup. After the club’s dissolution he was assigned to Lleida Esportiu, being promoted to the first team and making his senior debuts in the 2011–12 campaign, in Segunda División B.

On 11 June 2014, Milla moved to Getafe CF, being assigned to the reserves also in the third level. On 14 January of the following year he played his first match with the main squad, starting in a 1–0 home win against UD Almería, for the campaign’s Copa del Rey.

Milla scored his first professional goal on 22 April 2017, netting the winner in a 2–1 away success over Girona FC. On 6 July he moved to fellow second division club CD Numancia, on loan for one year.

Ahead of the 2018–19 campaign, Milla returned to the Armeros and was assigned to the first-team. He made his top tier debut on 24 August 2018, starting in a 0–2 away loss against former side Getafe. On 15 June of the following year, after appearing rarely, he signed a contract with Elche CF in the second division.

On 23 August 2020, Milla came off the bench to score Elche’s winning goal in the play-offs Final against Girona FC, taking his side back to the top tier after five years.