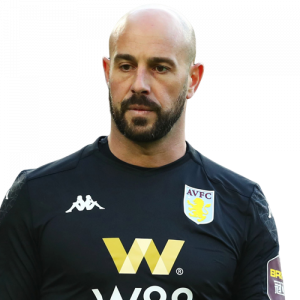 The son of famed Barcelona and Atlético Madrid goalkeeper Miguel Reina, Pepe Reina began his career with the Barcelona youth team and made his La Liga debut in the 2000–01 season. He signed for Villarreal in 2002, winning the UEFA Intertoto Cup twice. Reina moved on to Liverpool and made his debut in the 2005 UEFA Super Cup, which Liverpool won. He instantly became first-choice goalkeeper and went on to win both the FA Cup – where he saved three out of four West Ham United penalties in the final – and the FA Community Shield. In 2007, he reached the Champions League Final with Liverpool, matching the feat achieved by his father in 1974, but Liverpool lost to Milan.

Following eight consecutive seasons as Liverpool’s first-choice keeper, Reina spent the 2013–14 season on loan at Napoli, where he was reunited with Rafael Benítez, the coach who signed him to play for Liverpool in 2005. During his loan tenure in Naples, Reina was part of the side that won the Coppa Italia in 2014. Reina then completed a permanent move to Bayern Munich in 2014, where he was the second-choice keeper for behind Manuel Neuer. Reina returned to Napoli on a permanent deal in 2015, where he remained until 2018 when he signed for Milan. In January 2020, he completed a loan move to Aston Villa, before returning to Serie A with Lazio in August 2020.

At international level, Reina played for Spain’s youth team, winning the UEFA European Under-17 Football Championship in 1999. He made his senior debut in 2005, and has generally been selected as the second-choice keeper behind Iker Casillas and David de Gea. He was part of the Spain squad for the 2006 FIFA World Cup and made one appearance in their victorious UEFA Euro 2008 campaign, earning him his first international honour. He was later part of the Spain squads that won their first ever World Cup in 2010 and their third UEFA European Championship in 2012, as well as featuring at the 2014 and 2018 World Cups.