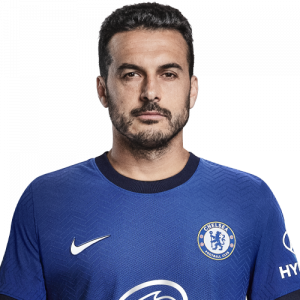 Pedro Eliezer Rodríguez Ledesma, known as Pedro, is a Spanish professional footballer who plays as a forward or winger for Serie A club Roma.

He is known for his pace, dribbling and ability to convert from counter chances.

Pedro scored 99 goals in 321 appearances across all competitions for Barcelona from 2008 to 2015, before joining Chelsea in 2015 where he scored 43 goals in 206 games and helped them win the Premier League in 2017, the FA Cup in 2018 and the UEFA Europa League in 2019. He joined the Serie A club Roma in 2020. He has won 26 major honours, including five La Liga titles and three UEFA Champions League titles. During the 2009–10 season, he became the first player in history to score in every official club competition in a single season and in a single calendar year.

Pedro represented Spain in two FIFA World Cups and two UEFA European Championships, winning the former in 2010 and the latter in 2012.

Roma
On 25 August 2020, Serie A club Roma announced the signing of Pedro on a three-year contract. He scored his first goal for the club on 3 October 2020 in a 1–0 victory over Udinese.