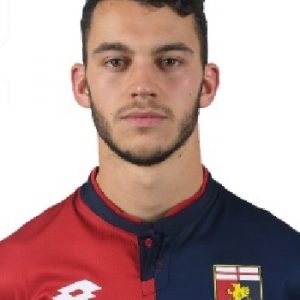 Pedro Miguel Almeida Lopes Pereira (born 22 January 1998) is a Portuguese professional footballer who plays as a right back for Italian club Crotone on loan from Benfica.

Born in Vendas Novas, Évora District, Pereira grew up supporting Sporting CP but switched allegiances to city rivals S.L. Benfica upon joining them as a youth. He transferred to Italian club U.C. Sampdoria in 2015 and made his professional debut in Serie A on 14 September that year, as a 22nd-minute substitute for Mattia Cassani in a 2–0 home win over Bologna F.C. 1909. On 4 October, he registered his first assist in a 1–1 draw with Inter Milan also at the Stadio Luigi Ferraris, for Luis Muriel to open the scoring.

On 30 January 2017, he returned to Benfica and signed a contract until 2022.He made his only first-team appearance for the Encarnados on 20 May in the last game for the already crowned champions, playing the full 90 minutes of a 2–2 draw at Boavista FC, and thereby being recorded as a league winner. His only other involvement with the club was on 28 October in the reserve team’s 4–0 loss at Gil Vicente FC, on the request of club president Luís Filipe Vieira to motivate the player who was out of first-team coach Rui Vitória’s plans.

In January 2018, Pereira was loaned back to Serie A, to Sampdoria’s city rivals Genoa C.F.C. on an 18-month deal. The Rossoblu were given the option to purchase him for €4.5 million.

Pereira was loaned again in August 2019, to Bristol City of England’s EFL Championship for a year with the option to buy for €6 million. He scored his first senior goal on 27 October, an 86th-minute equaliser in the Robins’ 2–2 home draw with Wigan Athletic, heading in a corner kick from Niclas Eliasson at the near post.