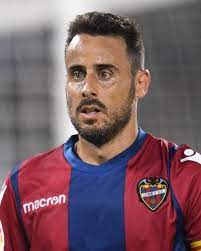 Pedro López Muñoz (born 1 November 1983) is a Spanish professional footballer who plays as a right back for SD Huesca.

Over 12 seasons, he amassed La Liga totals of 257 matches and five goals, in representation of Racing de Santander, Valladolid, Levante and Huesca.

Valencia and Racing
Born in Torrent, Valencian Community, López was a product of Valencia CF’s youth system. His input with the first team consisted of three appearances in the 2005 UEFA Intertoto Cup, as he was mainly associated to their reserves.

López would go on to make his La Liga debut for Racing de Santander during the 2004–05 season, having signed on loan.

Valladolid
López joined Real Valladolid in summer 2005, playing 36 matches for a side that achieved top-flight promotion two years later. He scored his first goal for the club the following campaign, a long-range strike during the 1–1 home draw against Real Madrid on 23 September 2007.

On 14 December 2008, firmly established as first-choice right-back, López netted from his half in a 3–0 home win over Deportivo de La Coruña. He continued to start regularly in the following seasons, suffering relegation in 2009–10.

Levante
Wishing to return to the top tier, López joined Levante UD of his native region on 19 July 2011, on a three-year deal. The team finished a best-ever sixth in his debut season, subsequently qualifying for the UEFA Europa League in which he played eight matches to help them reach the quarter-finals. He scored his first goal for the club on 31 March 2014, to confirm a 2–0 win at Granada CF.

On 16 May 2019, the 35-year-old López announced he would leave the Estadi Ciutat de València at the end of the campaign when his contract expired.