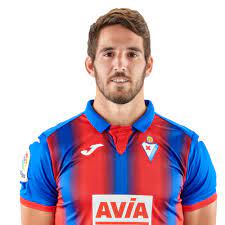 Pedro Bigas Rigo (born 15 May 1990) is a Spanish footballer who plays for SD Eibar as a defender or a midfielder.

Born in Palma, Majorca, Balearic Islands, Bigas made his debuts as a senior with CD Montuïri in 2009, in Tercera División. On 9 July 2010, he signed for Segunda División B club CD Atlético Baleares.

On 20 June 2011, Bigas joined RCD Mallorca, being initially assigned to the reserves also in the third level. He made his first-team – and La Liga – debut on 1 October, starting in a 2–2 away draw against CA Osasuna as a left back.

On 28 August 2012, Bigas renewed with the Bermellones until 2015, being definitely promoted to the main squad and being assigned the number 17 jersey. On 22 October he scored his first professional goal, netting the first in a 2–3 loss at Sevilla FC; he was regularly used as a left winger and central midfielder during the season, as his team suffered relegation.

On 13 July 2015, Bigas signed a two-year deal with UD Las Palmas, newly promoted to the top division. On 31 July 2018, after suffering relegation, he was loaned to SD Eibar of the same tier, with a buyout clause.