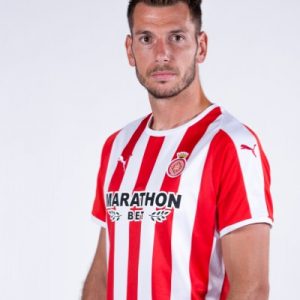 Pedro Alcalá Guirado (born 19 March 1989) is a Spanish professional footballer who plays for Cádiz CF as a central defender.

Born in Mazarrón, Region of Murcia, Alcalá was a product of Málaga CF’s youth academy. He appeared once for the first team in the 2006–07 season, with the Andalusians in the Segunda División. Subsequently, he spent two years on loan in Segunda División B, with AD Alcorcón and UD Marbella.

In late August 2009, another season-long loan was arranged as Alcalá joined recently promoted club Real Unión. After being relegated from division two and having appeared in less than half of the league’s matches, his contract with Málaga expired and was not renewed, so the player was released; soon afterwards, he moved to Getafe CF’s reserves in the third tier.

Alcalá signed with UD Almería’s B team in the summer of 2011, again as a free agent. The following week, he was called to the main squad for preseason.

In July 2013, Alcalá moved to second division side Real Murcia. Exactly one year later, after appearing sparingly during his first and only season, he joined UE Llagostera.

On 30 August 2015, Alcalá moved to fellow league team Girona FC after agreeing to a four-year deal. He was an undisputed starter the following campaigns, achieving promotion to La Liga in 2017.

Alcalá made his debut in the top flight on 19 August 2017, starting in a 2–2 home draw against Atlético Madrid. He scored his first goal in the competition seven days later, the game’s only in a home victory over Málaga CF.

On 5 October 2020, Alcalá signed a two-year deal with top-tier Cádiz CF after terminating his contract with Girona.