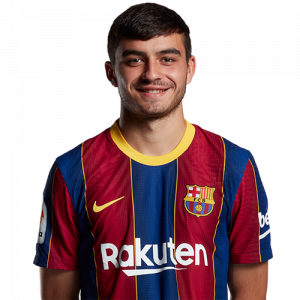 Pedro González López (born 25 November 2002), known as Pedri, is a Spanish professional footballer who plays as a central midfielder for La Liga club Barcelona and the Spain national team.

Barcelona
On 2 September 2019, Barcelona reached an agreement with Las Palmas for the transfer of Pedri, effective as of the following 1 July 2020. The player agreed to a five-year contract with the Catalan club, who paid €5 million for the deal which would later increase as he fulfilled various clauses in his contract.

Assigned to the main squad for the 2020–21 season and with the number 16 jersey, Pedri made his Barcelona – and La Liga – debut on 27 September, replacing Philippe Coutinho in a 4–0 home routing of Villarreal. He was handed his first start on 17 October, in a 0–1 away loss against Getafe. On 20 October 2020, Pedri scored his first goal for the club on his UEFA Champions League debut, in a 5–1 win over Ferencváros in the Champions League group stage, after coming on as a substitute in the 61st minute for Ansu Fati. On 7 November, in a 5–2 home win over Real Betis, he scored his first goal in La Liga after an assist from Sergi Roberto.

On 6 January 2021, he scored a headed goal against Athletic Bilbao and assisted Barcelona’s second goal in a 3–2 win at San Mamés. On 17 April, Pedri won his first ever trophy in his senior career after Barcelona beat Athletic Bilbao 4–0 in the Copa del Rey final. On 8 May, at 18 years and 164 days, Pedri made his 50th appearance for Barcelona in all competitions when he started in the 0–0 draw against Atlético Madrid at Camp Nou, thus becoming the second youngest player to reach this milestone after Bojan Krkić, who was 18 years and 3 days at the time he reached 50 appearances.