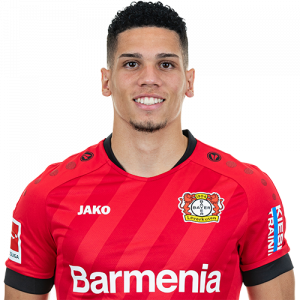 Paulo Henrique Sampaio Filho, commonly known as Paulinho (born 15 July 2000), is a Brazilian professional footballer who plays as a forward for German club Bayer Leverkusen and the Brazil national under-20 team.

Vasco da Gama
2017 season
Having progressed through Vasco da Gama’s academy, Paulinho was promoted to the club’s first-team squad under the management of Milton Mendes on 19 June 2017. On 13 July 2017, two days before his seventeenth birthday, made his professional debut when he was brought on as a 93rd-minute substitute in a 4–1 Brasileirão Série A away win over Vitória. Minutes after entering the field of play, he recorded his professional assist when he set up teammate Guilherme for his side’s fourth goal. Eleven days later, he made his first professional start and scored twice in a 2–1 league away win over Atlético Mineiro, becoming the youngest player ever to score at Brasileirão Série A and the first player born at 2000s to score at Brasileirão Série A. On 3 December 2017, Paulinho opened the scoring of a 2–1 home win over Ponte Preta at the last round of 2017 Brasileirão Série A and helped Vasco da Gama to reach a qualification to Copa Libertadores next season.

Bayer Leverkusen
On 27 April 2018, German club Bayer Leverkusen announced that they had reached an agreement with Vasco da Gama for the transfer of Paulinho. The clubs agreed to a €20 million fee, a club-record deal for Vasco. He joined Leverkusen ahead of the 2018–19 season and signed a five-year contract.