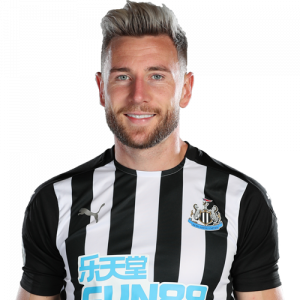 Paul Dummett (born 26 September 1991) is a professional footballer who plays as a defender for Premier League club Newcastle United.

Dummett began his career with his local side Newcastle United. After progressing through the youth ranks at the club, he had loan spells at Gateshead and Scottish side St Mirren. He made his Premier League debut in the 2013–14 season and scored his first Premier League goal against Liverpool on 19 October 2013. Dummett is a first team regular for Newcastle United and was part of their promotion from the Championship in 2017.

Dummett started the 2014–15 season as Newcastle’s first-choice left back, with Davide Santon injured and Massadio Haïdara on the bench. Dummett grabbed his second Magpies goal on 25 September 2014, scoring a late winner in extra-time against Crystal Palace in the League Cup. Playing alongside captain Fabricio Coloccini in the centre of defence, Dummett helped Newcastle keep clean sheets in victories over Manchester City and West Bromwich Albion. On 12 January 2016, Dummett scored a 90th-minute equaliser against Manchester United in a match that ended in a 3–3 draw at St James’ Park. Since 2017 Dummett is more regularly deployed as a centre back rather than a Left back.

Dummett qualifies to play for Wales through his Welsh grandfather. He was capped at under-21 level for Wales. He made his senior debut for Wales in the match against the Netherlands on 4 June 2014, coming in as a substitute in the 83rd minute. Dummett played his second international match on 13 November 2015, again against the Netherlands, coming on for Neil Taylor in 65th minute. In May 2016, Dummett was listed for the 29-man squad for a pre-Euro 2016 training camp. However, Dummett was among six players to be cut for the Euro 2016 squad. In May 2017, Wales manager Chris Coleman said that Dummett would no longer make himself available for international selection. He was recalled to the national team in August 2018, before making himself unavailable again in August 2019, seemingly ending his international career.