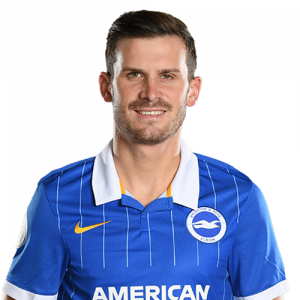 In May 2017, Brighton & Hove Albion signed Groß for a fee of £3 million. He agreed to a four-year contract while the transfer fee paid to Ingolstadt was the first of a series of record signings for the club that season.

He made his debut for Brighton in the Premier League on 12 August 2017, in a 2–0 home defeat to title favourites Manchester City. On 9 September 2017, Groß made history by scoring Brighton’s first ever Premier League goal, adding a second shortly after half time and providing an assist for Tomer Hemed in a 3–1 win at home against West Bromwich Albion. On 15 September, in Brighton’s 2–1 league defeat away to AFC Bournemouth, Groß provided the assist for Solly March’s opening goal.

On 15 October 2017, Groß provided his third assist of the season for Brighton, setting up Anthony Knockaert in a 1–1 league draw at home to Everton. On 20 November, Groß scored for Brighton in a 2–2 home draw against Stoke City. The goal brought his contribution tally up to three goals and five assists throughout the course of the season.

Groß ended a successful season for Brighton with seven goals and eight assists, including heading the winner against Manchester United on 4 May 2018, a win that secured Brighton’s Premier League status. Amongst many highlights, Groß was voted Brighton’s player of the season by an overwhelming majority.

On 6 June 2018, Groß signed a contract extension with Brighton, keeping him at the club until 2022.