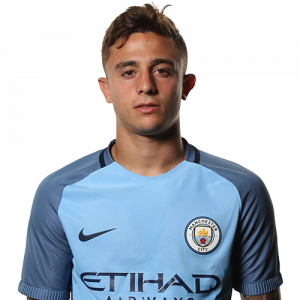 Pablo Carmine Maffeo Becerra (born 12 July 1997) is a Spanish professional footballer who plays as a right back for SD Huesca, on loan from German club VfB Stuttgart.

Early career
Born in Sant Joan Despí, Barcelona, Catalonia, of Italian descent, Maffeo joined RCD Espanyol’s youth setup in 2003, from FC Levante Las Planas. On 7 April 2013, he made his senior debut for the reserves at the age of only 15, coming on as a late substitute in a 1–0 home win against CE Constància in the Segunda División B.

Manchester City
On 3 July 2013, Maffeo and compatriot Manu García moved abroad, agreeing to a contract with Manchester City. He was initially assigned to the under-18 team, progressing through the club’s Elite Development squad.

Girona
On 13 January 2016, after signing a new three-year contract with City, Maffeo joined Segunda División club Girona FC on loan until June. He made his professional debut on 7 February, replacing Borja García in a 1–1 home draw against Gimnàstic de Tarragona.

VfB Stuttgart
On 14 May 2018, Maffeo signed a five-year contract with VfB Stuttgart, with the deal being made effective on 1 July. His first appearance in the Bundesliga took place on 26 August, in a 0–1 away loss to 1. FSV Mainz 05 where he featured the full 90 minutes.

Maffeo was loaned back to Girona on 20 June 2019. On 8 September 2020, he joined SD Huesca also in a temporary deal but with an option to make the move permanent. He scored his first goal in the Spanish top division five days later, in the 1–1 draw at Villarreal CF.