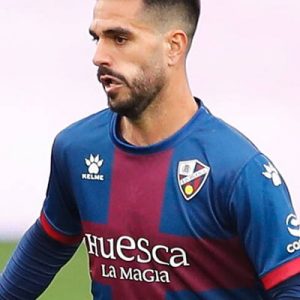 Pablo Insua Blanco (born 9 September 1993) is a Spanish professional footballer who plays as a central defender for SD Huesca.

Deportivo
Born in Arzúa, Province of A Coruña, Insua was a youth product of local Deportivo de La Coruña. He made his debut as a senior with the reserves, representing them in both the third and fourth divisions.

Insua made his official debut for the Galicians’ first team on 25 November 2012, playing the last ten minutes of a 1–1 La Liga away draw against Athletic Bilbao. On 17 August of the following year, with the club again in division two, he scored his first professional goal, the only in a win at UD Las Palmas.

Insua renewed with Depor on 25 March 2014, signing until 2018. He was an ever-present figure during the season, appearing in 39 matches and scoring three goals as his team returned to the top flight at the first attempt.

Leganés
On 15 August 2015, Insua was loaned to CD Leganés of the second tier for one year. He scored once from 35 games in his first year, helping to a first ever top-division promotion.

Insúa’s loan was renewed for a further season on 15 July 2016. He scored his first goal in the Spanish top tier on 21 January 2017, netting the equaliser in a 2–2 away draw with Deportivo Alavés.

Schalke 04
On 29 June 2017, after contributing 29 appearances as Leganés retained their newly acquired status, Insua signed with FC Schalke 04 on a four-year deal for an undisclosed fee. In September, he suffered myocarditis which kept him out of play for months until he returned to training in January 2018. His Bundesliga debut occurred on 17 March, when he came on as a 64th-minute substitute in the 1–0 away defeat of VfL Wolfsburg.

Insua agreed to a permanent three-year contract on 1 August 2020, after the club exercised their option to buy.