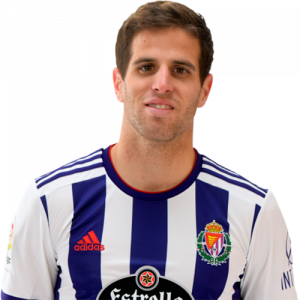 Pablo Hervías Ruiz (born 8 March 1993) is a Spanish professional footballer who plays for Real Valladolid as a winger.

Hervías was born in Logroño, La Rioja, and started playing football with local Peña Balsamaiso, being signed by Real Sociedad in 2005. He made his senior debut in the 2011–12 season, appearing for the reserves in Segunda División B.

Late into 2011, Hervías renewed his contract until 2016. On 19 April 2014, he played his first official game with for the first team, coming on as a late substitute for Chory Castro in a 2–1 La Liga home win against RCD Espanyol.

Hervías scored his first goal for the Txuriurdin’s main squad on 20 October 2014: again after having replaced Castro, he put the hosts ahead in the 82nd minute of a league home fixture against Getafe CF, but in an eventual 2–1 loss. On 8 May of the following year, he was loaned to Segunda División strugglers CA Osasuna until June, as a replacement to injured Jordan Lotiès; he found the net in his first appearance, helping his team to a 2–0 home win over CD Mirandés after replacing Karim Ansarifard.

On 25 July 2015, Hervías renewed his contract until 2018, and moved to second level club Real Oviedo on 3 August, on loan for one year. On 10 August of the following year, he joined fellow league team Elche CF also in a temporary deal.

Hervías signed for SD Eibar on 5 July 2017, moving on loan to second tier club Real Valladolid seven days later. After helping in the latter club’s top tier promotion, he returned to his parent club, but rejoined Valladolid on loan on 23 January 2019.

On 14 May 2019, Hervías was permanently signed by Valladolid as they remained in the top division for the following campaign. He scored his first goal in the competition on 15 September, in a 1–1 home draw to Osasuna.