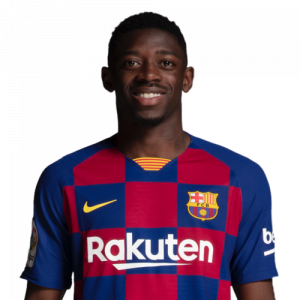 Masour Ousmane Dembélé (born 15 May 1997) is a French professional footballer who plays as a forward for Spanish club Barcelona and the France national team.

Born in Vernon, Dembélé began his career at Rennes before joining Dortmund in 2016. He won the DFB-Pokal with die Borussen in the 2016–17 season, scoring a goal in the final. A year later, he transferred to Barcelona for an initial fee of €105 million, becoming at the time the joint-second most expensive footballer ever alongside compatriot Paul Pogba. Dembélé subsequently won the double of La Liga and Copa del Rey in an injury-riddled first season in Spain.

After winning 20 caps and scoring five goals at youth level, Dembélé made his senior international debut for France in 2016. He was a member of the France squad that won the 2018 World Cup.

On 25 August 2017, La Liga side Barcelona announced that they had reached an agreement to sign Dembélé for €105 million plus a reported €40 million add-ons. On 28 August, he had his medical and signed a five-year contract, with his buyout clause set at €400 million. Barcelona had just sold Neymar to Paris Saint-Germain for €222 million, so the deal meant that Dembélé became the joint-second most expensive player (in euros), along with Paul Pogba. Rennes received a reported €20 million from Borussia Dortmund as a result of the sale, and Évreux 27 were also due part of the fee. He was handed the number 11 jersey that was previously held by Neymar.

Dembélé made his debut on 9 September as a 68th-minute substitute for Gerard Deulofeu in a 5–0 Derbi barceloní win over Espanyol at the Camp Nou, assisting the final goal by Luis Suárez. In his first league start eight days later at Getafe, he injured his hamstring and was ruled out for four months. He was given the medical all-clear on 2 January 2018, but a couple weeks later, he again injured himself against Real Sociedad and was ruled out for up to four weeks. On 14 March 2018, Dembélé scored his first goal for Barcelona, netting the second goal in a 3–0 second leg win in the Champions League round of 16 against Chelsea. On 17 April, he scored his first La Liga goal for Barcelona, notching the opening goal in an eventual 2–2 draw with Celta Vigo. On 9 May, Dembélé scored twice, marking the first brace of his Blaugrana career, in a 5–1 home victory over Villarreal. Dembélé won both the Copa del Rey and La Liga winners’ medals in his first season in Spain, with the 20-year-old scoring four goals in 24 appearances across all competitions.

On 12 August 2018, Dembélé scored the winning goal against Sevilla in the Spanish Super Cup, in an eventual 2–1 victory to win Barcelona their 13th Supercopa de España title. He opened his La Liga season’s goal tally by scoring the only goal of the game against Real Valladolid, on 25 August, away at the José Zorrilla. A week later, on 2 September, Dembélé notched his first home goal of the season, as the Blaugrana demolished newly promoted Huesca 8–2. Dembélé was again on the scoresheet the very next game, on 15 September, netting his third match winner of the ongoing campaign in a 2–1 away victory over Real Sociedad at the Anoeta. On 18 September, Dembélé scored his first Champions League goal of the season, helping Barça defeat PSV Eindhoven 4–0 at the Camp Nou. Coming on as a substitute against Real Madrid, on 28 October, Dembélé set up Arturo Vidal’s last goal of the game in a 5–1 home El Clásico triumph. Just a week later, again appearing from a bench role, he inspired Barcelona to a 3–2 comeback away against Rayo Vallecano, scoring the 2–2 equalizer with a half-volley in the 87th minute.

On the 11th of October he scored a remarkable solo goal against Tottenham outpacing many defenders, finishing with a cool left footed shot past Hugo Lloris. He won the UEFA Champions League Goal of the Week for that goal. After the match, Barça manager Ernesto Valverde praised the youngster, “He has made a great goal, within reach of players with his talent”.

His second brace for the Blaugrana came at the start of the year 2019. On the 17th, a match against Levante UD. Dembélé scored on the 31st and 32nd minutes. Barcelona winning by three goals to nothing. Additional goal by Lionel Messi, to advance to the next round of the Copa del Rey. Dembélé’s third Champions League goal for Barcelona was on the 13th of March in a 5–1 win against Lyon. The match was played the Camp Nou scoring the last goal from a Messi assist.

Dembélé injured his left hamstring in the opening match of the 2019–20 La Liga season, a 0–1 defeat against Athletic Bilbao, and was expected to miss five weeks. In February 2020, he suffered a serious hamstring tear and, following surgery, was not expected to return for six months. This would mean despite the extension of the season due to the COVID-19 pandemic, he would miss the rest of the season.

On 28 October 2020, Dembélé scored his first Champions League goal of the season in a 2–0 victory over Juventus.