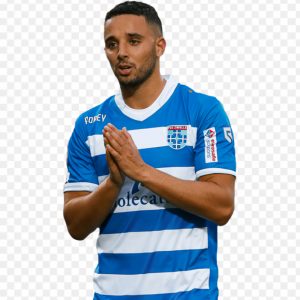 Ouasim Bouy (born 11 June 1993) is a Dutch professional footballer who plays as a defensive midfielder[2] or as a centre back for English club Leeds United.[3][4]

He is a former Netherlands U-19’s international, and he is currently able to represent either the Netherlands or Morocco.

Early career
Born in Amsterdam, Bouy grew up in the youth academy of A.V.V. Zeeburgia, where he remained from 1999 until 2008. The young player was scouted by local giants AFC Ajax, where he eventually transferred in July 2008.

After officially joining the neighboring giants, Bouy was registered into the club’s youth academy. Bouy would ultimately remain within the club’s youth setup for three years before transferring to Italian giants, Juventus on a free transfer.[citation needed]

Juventus
On 30 January 2012, Bouy traveled to Turin to have a medical in the Clinica Fornaca di Sessant and at the Istituto di Medicina dello Sport in order to formalize the potential transfer to Juventus, that was sealed just an hour later. Involved with the Primavera for the remainder of the season, he scored several goals and impressed with his creativity and maturity. On 31 August 2012, Bouy signed for Serie B side, Brescia Calcio on a season-long loan deal.[5] One day later, Bouy made his senior debut in the 2012–13 Serie B against Juve Stabia. Following his debut for the club, Bouy’s form continued to excel, as he earned a place in the club’s starting lineup, scoring a single goal, and assisting 5 others in his first 17 matches. His great form for Brescia was unfortunately brought to an end on 6 February 2013, when he suffered an ACL injury in a friendly, thus ending his season.[6]

On 30 June 2013, Bouy returned to Juventus upon the expiration of his loan deal. He played his first match for Juventus on 12 December 2013, entering as a substitute in the 2013–14 Coppa Italia against Serie B side Avellino. Juventus won the match 3–0 to progress into the quarter-finals. During the 2014 January transfer window, Brescia were rumored to be interested in re-acquiring his services on a six-month loan deal,[7]

Hamburger SV loan
On 16 January 2014, Bouy was officially loaned out to Hamburger SV of the Bundesliga, where he would be able to play under the guidance of fellow Dutchman, Bert van Marwijk. Commenting on the transfer, according to Sky Sports, the experienced coach was quoted as saying, “Ouasim Bouy was a super talent back at Ajax. I have never seen him play, still I am aware of him. He will strengthen us in midfield. He had a bad injury but now he is back fit and is longing to play.” After just 3 appearances for the club during the month of February,[8] Bouy failed to make any additional appearances for the first team during the remainder of the season after van Marwijk was sacked as manager of the German club in favor of Mirko Slomka. The club finished the campaign in 16th place and Bouy returned once again to Juventus on 30 June 2014.

Leeds United
On 2 August 2017, Bouy signed for English club Leeds United on a four-year deal on a free transfer from Juventus.[12]

Cultural Leonesa (loan)
On the same day Bouy signed for Leeds United, he was sent out on loan to Spanish side and “sister” team Aspire Academy owned Cultural Leonesa for the duration of the 2017–18 season.[13] On 3 January 2018, Bouy’s loan was cut short after failing to stamp his authority on the team, making just 4 appearances in all competitions for Leonesa, he was recalled by parent club Leeds United.[14]

Return to Leeds
On 2 February 2018, Leeds Head Coach Thomas Christiansen revealed Bouy had turned down loan offers on transfer deadline day, in order to stay at Leeds and earn an opportunity to play and fight for his place in the team.[15]

With speculation that he was not in new Head Coach Marcelo Bielsa’s plans, on 26 July 2018, Bouy was not given a shirt number for Leeds for the upcoming 2018–19 season for Leeds.[16]

PEC Zwolle loan
On 24 August 2018, Bouy joined Eredivisie side PEC Zwolle on a season long loan for the third time in his career.[17] He made his debut on 2 September 2018 in a 1–0 win against FC Groningen.[18] In total, he made 18 appearances for PEC Zwolle.