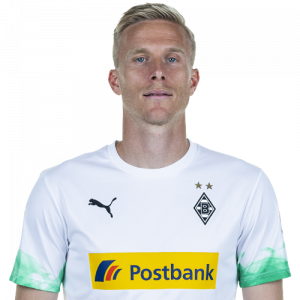 Oscar Joakim Wendt (born 24 October 1985) is a Swedish professional footballer who plays as a left-back for Borussia Mönchengladbach.

IFK Göteborg
After playing for IFK Skövde, he joined IFK Göteborg in 2003. He became an important first team player, earning 14 appearances on the Swedish U21 team and a call-up for the Swedish national team.

In his time at the club he played 91 matches, before moving to the Danish champions F.C. Copenhagen on a four-year contract for 6 million DKK. After his departure to F.C. Copenhagen, a huge gap arose in the defence, later filled by Argentine defender José Shaffer coming from Racing Club.

Copenhagen
In his first two years at Copenhagen, he struggled to become a first team regular, first being a back-up for former Norwegian international André Bergdølmo and later Danish international Niclas Jensen. However, in 2008, he managed to become a first choice on the left back position for his team, earning him a call-up to the Swedish national team, his first in over 18 months. His strong performances also had him linked with both English club West Ham United and Italian club Genoa.

With an injured Bergdølmo in F.C. Copenhagen’s 2006–07 UEFA Champions League campaign, Wendt played regularly as a left back, and in the team’s 3–1 win against Celtic, he alongside fellow Copenhagen defender Michael Gravgaard was chosen for the Eurosport “Team of the Round”.