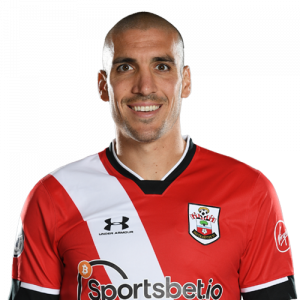 Oriol Romeu Vidal is a Spanish professional footballer who plays as a defensive midfielder for Premier League club Southampton.

He began his career at Barcelona, playing mainly in its reserves. In 2011, he joined Chelsea for €5 million, spending time on loan at Valencia and VfB Stuttgart before moving to Southampton four years later.

Romeu represented Spain up to under-21 level, and was part of their under-17 team which won the 2008 European Championship. He also played for the country at the 2012 Olympics.

On 13 August 2015, Romeu joined Southampton for £5 million on a three-year deal. He made his debut two days later, as a half-time substitute for Dušan Tadić in a 3–0 home defeat to Everton, earning a booking after three minutes for a foul on James McCarthy. He scored his first goal for the Saints – and first in a professional league – on 5 December, equalising for a 1–1 draw against Aston Villa at St Mary’s Stadium.

After missing only one league game all season for Claude Puel’s Saints, Romeu signed a new four-and-a-half-year deal on 24 January 2017. Puel compared Romeu to Chelsea player N’golo Kante. He was voted the club’s Player of the Season, at the end of a campaign that saw them reach the EFL Cup Final.

On 23 February 2021, Romeu produced “one of the greatest tackles of all time” after he made up a serious amount of ground to prevent Leeds forward Raphinha from scoring, but the game ended in a 3–0 defeat. In the same game, Romeu picked up an ankle injury which required surgery, seeing him miss the remainder of the season.