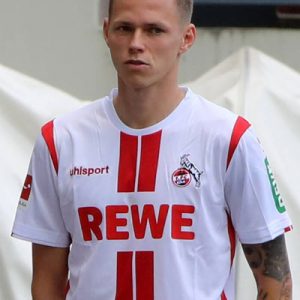 Ondrej Duda (born 5 December 1994) is a Slovak professional footballer who plays as an attacking midfielder for 1. FC Köln and the Slovakia national team.

Duda began his football career at his hometown club MFK Snina. He later moved to Košice, where he rose through the youth team ranks, making his first-team debut for the club at the age of 17 as a late substitute during a 1–0 home win against Slovan Bratislava.

Hertha BSC
On 20 July 2016, Duda signed for Bundesliga side Hertha Berlin on a five-year deal.  After being sidelined with a knee injury shortly after signing and also undergoing knee surgery in November 2016, Duda made his competitive debut for Hertha on 25 February 2017 in a 2-0 win over Eintracht Frankfurt as an 89th-minute substitute, 7 months after signing with the club. Duda famously scored against Bayern Munich, as he smashed home a cross into the roof of the Bayern net, past a helpless Manuel Neuer. Duda’s goal was Hertha Berlin’s second goal against Bayern, as the Slovak international inspired the Berliners to a 2-0 victory over the German champions.

Loan at Norwich City
Duda was loaned to Norwich City for the rest of the 2019–20 season on 12 January 2020. He had commented, that he intends to be entertained by the game again and is happy about a move to an even better league, hoping for notable play-time.

In September 2020, it was announced that Duda had had signed a four-year contract with Bundesliga side 1.FC Köln. The move came days after Hertha had bought Colombian striker Jhon Córdoba from the same club.