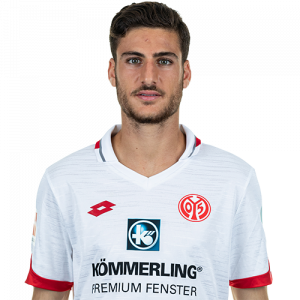 Omer Hanin (born 14 May 1998) is an Israeli-Portuguese footballer who plays as a goalkeeper for Bundesliga club Mainz 05.

Hanin was trained at the major Israeli clubs Maccabi and Hapoel as well as at his home club Hapoel Rischon LeZion.

At the end of 2016 he was in the second division home game against Hapoel Bnei Lod (0: 2) in the starting line-up and thus for the first time in men’s football.

After a season without a game at Hapoel Petach Tikwa, the first division club Hapoel Hadera signed the young goalkeeper in the summer of 2018 as a substitute for regular goalkeeper Levkovich. Hanin played three times for Hadera, the club missed qualifying for the European Cup at the end of the season as sixth in the championship round.

In the summer of 2019, the goalkeeper left his home country and moved to Germany to the Bundesliga club 1. FSV Mainz 05. Scouts of the club had observed the Israeli during his time as an Israeli young national player and recommended him for a commitment after a few trial training sessions. With the Rheinhessen, Hanin received a contract that runs until June 2023. He went into the 2019/20 season as the third goalkeeper of the professional team, but initially plays for the U23 in the regional league.