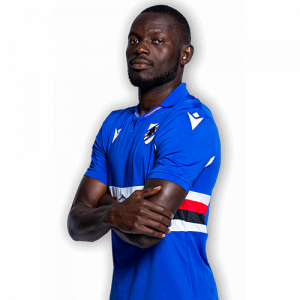 Omar Colley (born 24 October 1992) is a Gambian professional footballer who plays as a defender for U.C. Sampdoria.

Gambian clubs
Colley started out playing youth football with Wallidan FC who are a part of his home country’s top flight GFA League First Division. After he started playing for the first team he trialed with Major League Soccer club Sporting Kansas City on two occasions in 2010 and 2011.

KuPS
In January 2013, he signed a two-year contract with KuPS. During the time between his two seasons in Finland he trialed with a couple of 2. Bundesliga clubs and Arminia Bielefeld made an offer to buy Colley.

Djurgårdens IF and Genk
In August 2014, Colley signed a three-year contract with Swedish side Djurgårdens IF, starting the first of January 2015. He played his debut game for the club on 22 February 2015 against Ängelholms FF in the Swedish Cup. On 12 August 2016, Colley travelled to Belgium to complete a medical with top-tier club K.R.C. Genk and by doing that Colley missed the training session ahead of the match versus IF Elfsborg which was against the will of Djurgården.