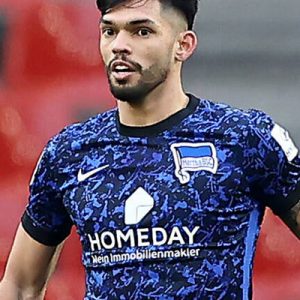 Omar Federico Alderete Fernández (born 26 December 1996) is a Paraguayan professional footballer who plays as a centre-back for Bundesliga club Hertha BSC and the Paraguay national team.

Club career
Alderete began his career with Cerro Porteño, he played for their U20s at the 2016 U-20 Copa Libertadores between January and February 2016 where he scored one goal (vs. Bolívar) in three games. Months later, in May 2016, Alderete made his professional debut for the club in a Paraguayan Primera División loss to Rubio Ñu. In his third league appearance, he scored his first senior goal in an away win versus Guaraní on 31 July. In August 2017, Alderete joined Argentine Primera División side Gimnasia y Esgrima on loan. His first appearance came in a 4–4 draw with Defensa y Justicia on 26 August.

After one goal in twenty-two matches for Gimnasia y Esgrima, Alderete completed a transfer to Huracán at the conclusion of his loan spell. On 4 June 2019, Alderete agreed a move to Swiss Super League outfit Basel; with the deal officially going through on 11 June. His debut arrived in the league against Sion on 19 July, prior to scoring his first goal four days later in a UEFA Champions League qualifier over PSV Eindhoven. On 5 October 2020, Alderete signed a long-term deal with Hertha BSC. He made his debut in a 2–1 debut at the Red Bull Arena against RB Leipzig on 24 October.

International career
Alderete has represented Paraguay at U17, U20 and U23 level. He won eight caps for the U17 team at the 2013 South American Under-17 Football Championship in Argentina, prior to winning seven caps for the U20s at the 2015 South American Youth Football Championship in Uruguay. In May 2016, Alderete played four times for the U23s at the 2016 Toulon Tournament in France, scoring one goal in a win over Guinea on 19 May. He was called up to train with Juan Carlos Osorio’s senior squad in 2018. He made his debut for them on 20 November 2018 in a friendly against South Africa; as a starter.