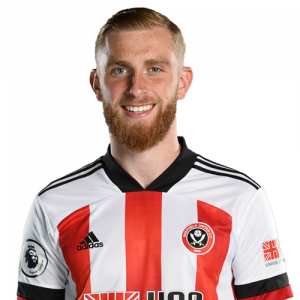 Oliver Robert McBurnie (born 4 June 1996) is a professional footballer who plays as a striker for Premier League club Sheffield United and the Scotland national team.

Born in England to a Scottish father and mother, he represents Scotland at international level, making his senior debut in March 2018.

n July 2019, McBurnie was the subject of a transfer bid from Sheffield United, which was rejected by Swansea. Later that month Sheffield United increased their bid, which Swansea accepted.

On 2 August 2019 McBurnie signed for Sheffield United on a four-year deal for a fee of £17.5 million, potentially rising to £20 million. The fee set a new club record for Sheffield United and a new record for a transfer involving a Scottish player, until it was beaten a few days later by Kieran Tierney’s £25 million move from Celtic to Arsenal. McBurnie’s former club Bradford City were set to receive a windfall from his sale.

On 24 November 2019 he scored the equaliser as Sheffield United drew Manchester United 3–3 at Bramall Lane. The goal was challenged by VAR but upheld. He finished the 2019–20 season as Sheffield United’s joint highest goalscorer along with Lys Mousset on 6 goals.