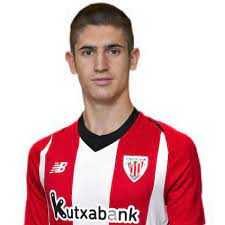 Oihan Sancet Tirapu (born 25 April 2000) is a Spanish professional footballer who plays as a central midfielder for Athletic Bilbao.

Born in Pamplona, Navarre, Sancet joined Athletic Bilbao’s youth setup from CA Osasuna in 2015. On 18 June 2018, he was called up to the pre-season with the first-team by manager Eduardo Berizzo.

Sancet made his senior debut with the reserves on 25 August 2018, starting and scoring the opener in a 2–0 Segunda División B home defeat of CD Tudelano. In early September, however, he suffered a knee injury (a tear to his left anterior cruciate ligament), returning to action only in the following March.

For the 2019–20 season, Sancet was included in the main squad by manager Gaizka Garitano. He made his professional – and La Liga – debut on 16 August 2019, coming on as a second-half substitute for Óscar de Marcos in a 1–0 home win against FC Barcelona; on 27 June (his sixth league start), he scored his first goal in a 3–1 victory over RCD Mallorca, also at San Mamés. By December 2020, he had reached sufficient milestones to trigger a €150,000 development payment to Osasuna.