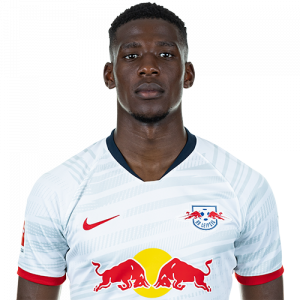 Nordi Mukiele Mulere (born 1 November 1997) is a French professional footballer who plays as a defender for Bundesliga club RB Leipzig.

Mukiele was born in France to parents of DR Congolese descent. He is a France youth international.

Laval
Mukiele began his professional career in Stade Laval, where he broke into the first team age 17. He made his debut on 28 November 2014 in a 1–1 league draw against Auxerre. He gained attention while playing for Laval and eventually transferred to Montpellier HSC for a fee of €1.35 million.

Montpellier
Mukiele transferred to Montpellier in January of 2017. He made his debut for the club on 21 January 2017 in a 2–0 league loss against Metz. In 2018, Mukiele signed with German club RB Leipzig.

RB Leipzig
Mukiele signed for Leipzig in a deal that summed up to a total of €16 million. His contract duration is of five years. He made his debut for the club on 26 July 2018, in a Europa League qualifier against Häcken that ended as 4–0 win. His first Bundesliga appearance came in a 1–1 draw with Düsseldorf on 2 September 2018.