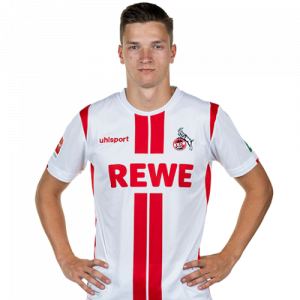 Noah Katterbach (born 13 April 2001) is a German professional footballer who plays as a left-back for 1. FC Köln.

One of Germany’s most promising prospects, he has won the prestigious Fritz Walter Medal in Gold in two consecutive year groups (under-17 and under-19).

Köln
Katterbach spent the majority of his youth career at 1. FC Köln, starting at the under-8 level. In 2018, he was awarded the Fritz Walter Medal in Gold, honouring the best German player in the under-17 age group.

2019–20 season
On 5 October 2019, he made his professional debut for the club in a 1–1 draw against Schalke, making him the youngest player to appear in the Bundesliga that year. During the 2019–20 season, Katterbach established himself in the club’s first team squad and made 18 league appearances. In May 2020, it was announced that he had signed a contract extension keeping him at Köln until 2024.

2020–21 season
On 19 August 2020, Katterbach was awarded the Fritz Walter Medal in Gold for the second time, this time honouring him as the best German player in the under-19 age group.