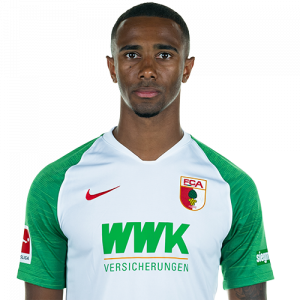 Noah Joel Sarenren Bazee[2] (born 21 August 1996) is a Nigerian footballer who plays as a right winger for FC Augsburg in the Bundesliga.

Sarenren Bazee grew up in Walle near Celle, where he played for several clubs. In 2011, he moved to the Hanover region for TSV Havelse. In 2013, he moved to Hannover 96. He played in the Under 19 Bundesliga and the Regionalliga Nord before making his debut on April 8, 2016 against Hertha BSC both in the squad, and together with Waldemar Anton also in the starting lineup.

On 18 June 2019, FC Augsburg announced that they had signed Bazee for the upcoming season. He penned a 5-year contract.