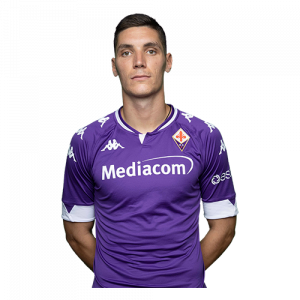 Nikola Milenković (born 12 October 1997) is a Serbian professional footballer who plays as a centre-back and right-back for Fiorentina and the Serbia national team.

Partizan
2015–16 season
Passing the youth categories of Partizan, Milenković was loaned to Teleoptik for the 2015–16 season. At the beginning of 2016, he joined the first team of Partizan under coach Ivan Tomić and signed a five-year contract, but also stayed with Teleoptik on dual registration until the end of season. Several days after debut for U19 national team, he made his debut for Partizan in a SuperLiga match against Mladost Lučani played on 10 April 2016. He started in a match against Čukarički in round 32 of the same season and received a red card for a brutal foul on Petar Bojić, which resulted in a suspension for the next four matches. Milenković scored his first senior goal for Partizan in the last fixture of the 2015–16 Serbian SuperLiga, against Vojvodina, which was the hundredth goal of the club for the season.

2016–17 season
Milenković started new season pairing with Cédric Gogoua for the second qualifying round of the 2016–17 UEFA Europa League against Zagłębie Lubin. He also started SuperLiga competition in the first fixture match against Bačka Bačka Palanka before spending the following two rounds on the bench. After several bad results and some injuries of the players in defense, Milenković started playing continuously from the fourth fixture against Javor Ivanjica onwards. He scored his first season goal in a match against Rad, played on 27 August 2016. He also made his Serbian Cup debut in the first round match, against Napredak Kruševac on 21 September 2016. After Miroslav Vulićević’s injury in a cup match against Žarkovo on 25 October 2016, Milenković wore the captain’s armbrand. In February 2017, he was listed as one of the 30 best youth footballers in the world by the Italian newspaper La Gazzetta dello Sport. he scored his third goal for Partizan as a senior in 27 fixture match of the season against Voždovac, played on 18 March 2017.

On 27 May, in his last match for Partizan, Milenković scored a header against Partizan’s biggest rival Red Star which won the game and clinched Partizan’s double of the season, winning both the league and cup competitions.

Fiorentina
On 24 May 2017, Partizan president Milorad Vučelić confirmed that Milenković would be joining Serie A side Fiorentina in the summer. The transfer fee was reported as €5.1 million. Milenković made his debut for Fiorentina in 1–0 away victory over Cagliari on 22 December 2017, having played 84 minutes of the game.