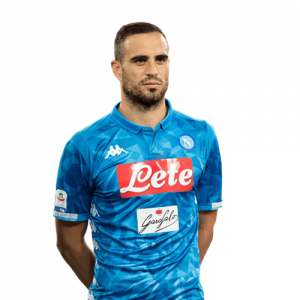 Nikola Maksimović (born 25 November 1991) is a Serbian professional footballer who plays as a centre-back for Italian club Napoli and the Serbia national team.

Early career
Maksimović began his career with Kosmos Bajina Bašta, before moving to Sloga Bajina Bašta. He represented both clubs in youth competitions. Maksimović made his senior debut for Sevojno in the 2008–09 Serbian First League. He also played against FBK Kaunas and Lille in the 2009–10 UEFA Europa League.

In the summer of 2010, Sevojno merged with Sloboda Užice. On 19 September 2010, Maksimović received the first yellow card of his career during a match against Spartak Subotica, and scored the first goal of his professional career on 5 March 2011 in Lučani.

Red Star
During the 2012 winter transfer window, Maksimović was signed by Red Star Belgrade for a reported fee of 300,000€. He made his debut on 3 March 2012 in a match against Spartak Zlatibor.

At the end of the season, 51% of his contract was acquired by Cypriots Apollon Limassol.

Torino
On 23 July 2013, he was loaned to Italian Serie A club Torino with a buyout clause; he made his official debut on 6 October as a substitute against Sampdoria in Genoa, finishing 2–2. Over the course of the season he earned a spot in the starting lineup, first, as a central defender, then as a right-sided midfielder.

On 27 May 2014, Torino exercised the right to purchase him outright; Maksimović signed a contract until 2018.

Napoli
On 31 August 2016 he was transferred to Napoli on loan with obligation to buy. On 28 September 2016, Maksimović made his debut in 4–2 home victory over Benfica. On 23 October 2016, he scored his first goal in Serie A, in 2–1 away victory over Crotone.

Spartak
On 26 January 2018, he joined the Russian champions FC Spartak Moscow on loan until the end of the 2017–18 season.