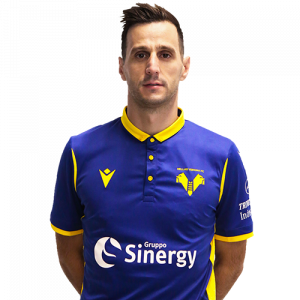 Nikola Kalinić (born 5 January 1988) is a Croatian professional footballer who plays as a striker for Italian club Hellas Verona.

Kalinić began his career with Hajduk Split in his native Croatia before moving to English club Blackburn Rovers for £6 million in 2009. After scoring rarely in two Premier League seasons, he left for Ukrainian side Dnipro Dnipropetrovsk, helping them reach the 2015 UEFA Europa League Final. He then played in Serie A for Fiorentina and A.C. Milan, before signing for Spanish club Atletico Madrid ahead of the 2018–19 season, winning the 2018 UEFA Super Cup.

Kalinić made his debut for Croatia in 2008 and represented the nation at three UEFA European Championships. He was part of their side that came runners-up at the 2018 FIFA World Cup but was sent home after one game.