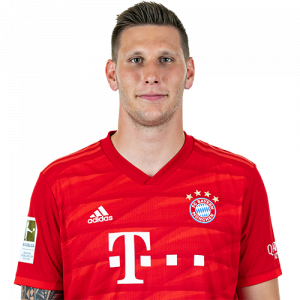 Niklas Süle (born 3 September 1995) is a German professional footballer who plays as a centre back for Bundesliga club Bayern Munich and the Germany national team.

International career
With the German U17, he participated in the 2012 UEFA European Under-17 Championship.

He was part of the squad for the 2016 Summer Olympics, where Germany won the silver medal.

Süle was called up in August 2016 when the Germany national football team played Finland and Norway. He was brought off in the 59th minute against Finland.

Süle was named in Germany’s final 23-man squad by Joachim Löw for the 2018 FIFA World Cup. On 27 June, Süle made his first World Cup appearance in the last match of the group stage in a 2–0 defeat to South Korea as his side got knocked out from the World Cup for the first time since 1938.