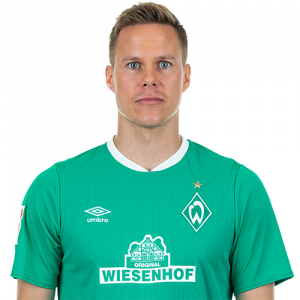 Niklas Moisander (born 29 September 1985) is a Finnish professional footballer who plays as a centre-back for German club Werder Bremen.

Moisander was born in Turku, where he played for the local TPS youth team before moving to AFC Ajax. He is the twin brother of goalkeeper Henrik Moisander, and is a former captain of the Finland national team.

Moisander made his international debut for Finland in May 2008, at age 22, and had 62 caps, including appearing in 2010, 2014 and 2018 FIFA World Cup qualifications before his retirement from international football in 2017. He was voted the Finnish Footballer of the Year in both 2012 and 2013.

Werder Bremen
On 9 July 2016, German Bundesliga side Werder Bremen announced it had completed the signing of Moisander. The transfer fee paid to Sampdoria was a reported €1.7 million. He made his Bundesliga debut in a 1–4 loss against Borussia Mönchengladbach on 16 September 2016, replacing Fallou Diagne at half-time with Werder Bremen trailing 0–4.

On 8 July 2017, he suffered a torn muscle fibre in his right thigh playing in a friendly match against his former club Ajax Amsterdam, the match was later abandoned because Ajax player Abdelhak Nouri suffered a heart attack.

In July 2018, Moisander’s contract was extended.

In July 2019, he was announced as the club’s captain after Max Kruse’s departure. After playing the first three league matches of the season, he suffered a thigh injury. In November, while still unable to play due to the injury, he agreed a contract extension with Werder Bremen, reportedly until 2021.