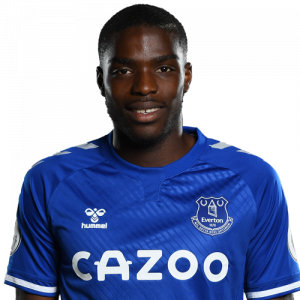 Niels Patrick Nkounkou (born 1 November 2000) is a French professional footballer who plays as a left-back for Premier League club Everton.

Nkounkou started his career with French club Cergy Pontoise FC, coming through the club’s youth ranks. He signed for Ligue 1 giants Marseille in 2017. As a promising youngster, Nkounkou played regularly for Marseille’s B team, routinely training with the senior side and featuring on the bench twice for the first team during the 2019–20 season.

Nkounkou joined Everton on a free transfer in July 2020, signing a three-year deal, after rejecting a professional contract from Marseille due to the sporting plan proposed by the French club wasn’t convincing for the defender and his future development. The opportunity of working under Carlo Ancelotti convinced Nkounkou to join the Toffees. Nkounkou’s agent Yvan Le Mée stressed that Ancelotti called the player, spoke to him, and knew the player’s potential. By working with the player, Ancelotti can make him a top player.

Nkounkou made his professional debut for Everton in a 3–0 EFL Cup victory against Salford City in which he impressed immensely, forming an effective attacking partnership down the left hand side of the pitch with fellow youngster Anthony Gordon. He put in another positive display in his second match, also in the EFL Cup, against Fleetwood Town which he capped with a back-heeled assist to set up a goal for Moise Kean in a 5–2 victory.

Nkounkou played his first league game for Everton on 1 November 2020 against Newcastle United, a game Everton lost 2-1. He replaced teammate Lucas Digne who was serving a 1 match ban.