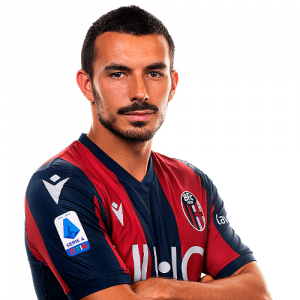 Nicola Domenico Sansone (born 10 September 1991) is an Italian footballer who plays as a forward for Italian club Bologna and the Italian national team.

Sansone was born in Munich in Germany and his first club was SV Neuperlach. At the age of 10, he transferred to Bayern Munich, where he progressed through the Junior Team. He made his debut for Bayern’s reserve team in January 2010, in a 3. Liga match against Dynamo Dresden. He made three more appearances in the 2009–10 season, and was a regular in the team during the 2010–11 season. In October 2010, he was named on the substitutes bench for the first-team in a Bundesliga match against SC Freiburg. He was released in June 2011 after Bayern’s reserves were relegated from the 3. Liga.

Sassuolo
On 21 January 2014, Sansone along with teammates Pedro Mendes and Aleandro Rosi joined Sassuolo from fellow Serie A club Parma. Sansone and Mendes both signed co-ownership deals, for €2.5 million and €500,000 respectively. Rosi however made a loan switch from Parma to Sassuolo, as part of the swap with Jonathan Rossini also in temporary deal.

In June 2014 Raman Chibsah and Sansone joined Sassuolo outright for an additional €5.75 million from Parma, as well as Parma bought back Mendes for €2.5 million.

Villarreal
On 7 August 2016, Sansone signed with Villarreal on a five-year contract reported to be in the region of €13 million. He made his club debut in a 1–1 away draw against Granada in La Liga, on 20 August, and scored his first goal for the club in a 2–0 away win over Málaga in La Liga, on 10 September.

Bologna
On 4 January 2019, he joined Italian club Bologna on loan with an obligation to buy.