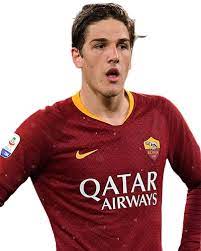 Nicolò Zaniolo (born 2 July 1999) is an Italian professional footballer who plays as a midfielder for Serie A club Roma and the Italy national team.

Roma
In June 2018, it was reported that Zaniolo and Davide Santon had joined Roma as a part of the deal moving Radja Nainggolan to Inter. Zaniolo completed his medical on 25 June, and signed a five-year contract with the club, for a fee of €4.5 million plus 15% resell revenue. He made his first appearance for Roma and UEFA Champions League debut on 19 September, in a 3–0 defeat to Real Madrid at the Santiago Bernabéu. He made his Serie A debut on 26 September 2018, aged 19, in the home match won 4–0 against Frosinone. On 26 December, he scored his first goal in Serie A in a 3–1 win against Sassuolo. The following year, during a UEFA Champions League match against FC Porto, Zaniolo became the youngest Italian player to score twice in a single match in the competition when he scored both of Roma’s goals in a 2–1 win.

On 12 January 2020, Zaniolo suffered an anterior cruciate ligament injury in his right knee during a 2–1 home loss to Juventus. He returned to training in late June 2020. In addition, he received letters of support from both the Italian and global footballing community, including Roberto Mancini, Roberto Baggio, and Francesco Totti, who had previously been operated by the same surgeon.