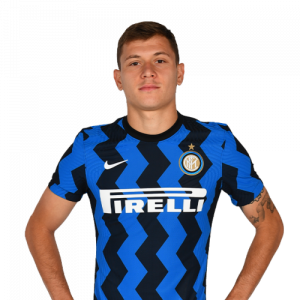 Nicolò Barella (born 7 February 1997) is an Italian professional footballer who plays as a midfielder for Serie A club Inter Milan and the Italy national team.

On 12 July 2019, Barella joined Inter Milan on a year-long loan deal with an obligation to buy with four-year contract to take effect after the loan period.

He made his club debut on 26 August against Lecce; he came off the bench in the second half for Matías Vecino, and later helped set-up Antonio Candreva’s goal in an eventual 4–0 home win in Inter’s opening match of the 2019–20 Serie A season.

He made his Champions League debut on 17 September against Slavia Prague; after coming off the bench for Marcelo Brozović in the second half, he scored an injury-time equalising goal to help Inter to a 1–1 home draw, which was his first goal both in the competition and for Inter.

On 9 November, he scored his first league goal for the club as Inter came from behind to achieve a 2–1 home win over Verona.

He scored his first goal in the Coppa Italia on 29 January 2020, in 2–1 home win over Fiorentina, in the quarter-finals of the tournament.

On 17 January 2021 Barella assisted for the first goal for Arturo Vidal and scored a vital second in a 2–0 home win against rivals and defending champions Juventus in Serie A.