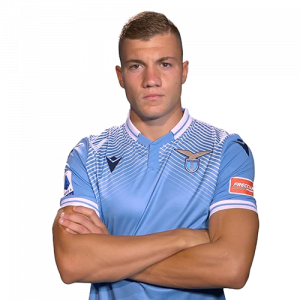 Nicolò Armini (born 7 March 2001) is an Italian footballer who plays as a centre-back for the Serie A club Lazio.

Club career
Armini is a youth product of Lazio, whom he joined from Santa Maria delle Mole. Considered one of the club’s most promising prospects, he has been compared to Lazio legend Alessandro Nesta.

On 29 November 2018, Armini made his professional debut in a UEFA Europa League game against Apollon Limassol. He came on as a substitute for Felipe Caicedo as his team lost 2–0. On 20 May 2019, Armini made his first Serie A appearance, coming into play instead of Luiz Felipe, who came off due to an injury, in a match against Bologna which ended in a 3–3 draw.

International career
With the Italy U17 team, Armini participated in the 2018 UEFA European Under-17 Championship in England. A starter in central defense throughout the tournament, he took part in all of his team’s six games. He even appeared as team captain in the semi-final, which was won over Belgium. Italy eventually lost to the Netherlands in the final after a penalty-shootout. Armini was subsequently included in the UEFA team of the tournament.

With the under-18 team, Armini appeared as captain five times, and scored a goal against Slovenia in August 2018.

With the under-19 team, he participated in the 2019 UEFA European Under-19 Championship in Armenia. He only took part in one match during this competition, against the hosts Armenia, where the Italians won by a large margin of 0–4.